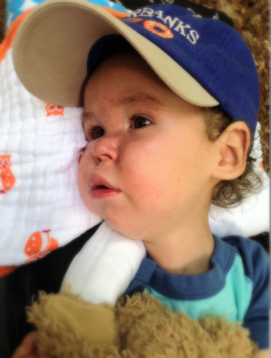 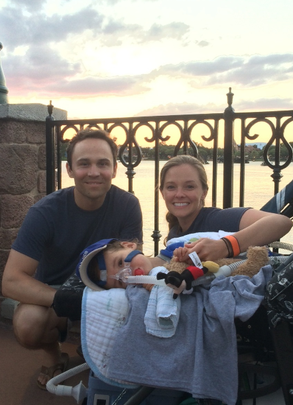 Leo has to go through a lot of extra "stuff" than most kids. He has breathing treatments every morning and evening and throughout the day as needed. Bed time are morning routine are both at least an hour and 1/2. He also has his therapies and doctor appointments. We try to make the most of his free time. We typically go on at least one adventure a day. We go to the park several times a week, the zoo and other random outings. He also LOVES being outside at his house. He loves going for wagon rides down his driveway and through his woods with his pal Wyatt. He also likes watching his chickens, swinging and playing outside. He loves to read, paint and play games on his tobii. He also loves tv and movies. We try to keep him on somewhat of a schedule, but like with any child, it doesn't always go as planned! A big difference for Leo is that if it is close to nap time or bedtime, he is VERY tired. His body has been working very hard, and it becomes difficult for him to catch his breath when he becomes too tired. If he is out later than normal or just his is having an exhausting day, we will often put his bipap (pappy) on him, so he can relax and enjoy himself. 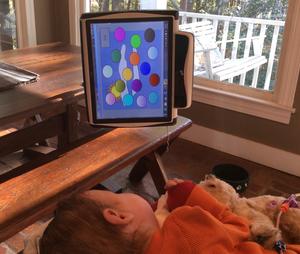 We have been learning how to adapt toys so that Leo can control them. He has a special switch that he is able to operate by himself when we hold it for him. This switch can be connected to adapted toys so he can operate them. For example, we took a pitching machine and adapted it so instead of pushing the button the typical way, Leo can control it with his switch. He can squeeze his switch and "pitch" the ball. He also has a blue tooth switch adapted set that allows him to play different games on the iPad by using his switch. They also make tons of already adapted toys for kids like Leo. There are so many possibilities!

We also still play with "normal" toys all the time, and Leo LOVES them too! He loves playing with trucks, painting and playing the xylophone to name a few. We just have to help him. He is not able to independently play, with supervision so all playtime is spent doing things together!

Leo uses various methods of communication. He as a Tobii Eye Gaze computer. This is a computer with games, communication software and internet access that Leo can control all by using his eyes! He has been able to operate this computer since he was 10 months old! His progress and ability to navigate using this computer have amazed me! Like other children, he is growing an learning so fast and I am so very thankful that we live in an age where he has access to such amazing technology. He enjoys talking about his best buddy Wyatt, playing music, and other games. He has been able to tell me about the animals at the zoo, when he needs a diaper change and say "I love you." He also likes to say wagon ride, and outside (his favorite things)

Leo also communicates by saying "uh huh" and blinks once for yes. He also makes choices by looking at a particular item. We have learned to read his eyes and other expressions. It is helpful that he is very opinionated!

There are many things I remember hearing early on after Leo's diagnosis. Two things in particular stand out in my mind.

1. You will have a new normal- Yes. we most definitely have a new normal. Our lives, to us, are completely normal. Having a "typical" child is not normal to us! This phrase has continued to grow with us. Our new normal has constantly changed and grown with Leo.

2. It WILL get easier- Absolutely, yes. Part of this is because it becomes your new normal! Another part of this is learning how to take better care of Leo. Reading and researching as much as we can to try and stay on top of anything that could come our way. Leo has also grown up, and some things have just gotten easier because of this. A year ago I could not have imagined I would be meeting friends at the zoo, going shopping and running with Leo. With time, things have gotten much easier. That is not to say they will remain this way. Unfortunately, with SMA ,you never know what is around the corner.

Most importantly we want everyone to know that Leo lives! Just because a child is different from you, or yours does to mean they can't have a high quality of life. Our days are very different, but filled with joy, love and fun.