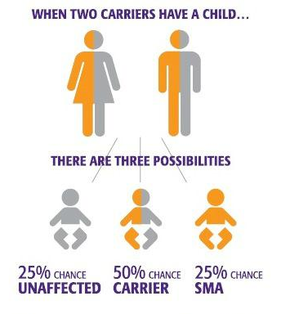 How do you get SMA?

IT'S ALL IN THE GENES

Our bodies are comprised of thousands of nerve cells. Nerves are what control our muscles and allow them to contract. Without properly functioning nerves, our muscles will not function properly. The protein SMN1 is responsible for the "health" of our nerves cells.  An individual with SMA is lacking the the ability to produce this protein, thus leading to neurons that do not function properly and eventually die. Muscles are affected and muscled weakness and atrophy occurs.

"Most people have two copies of the SMN1 gene. Individuals who have one faulty copy and one functioning copy are called carriers. Carriers do not have SMA, but they may pass the faulty gene on to their children.

SMA is an autosomal recessive genetic disorder. This means that, generally, both parents must pass on the mutation for the child to have SMA.